A new third-party alternative to the iOS app store has been released, called iOSEmus, and offering some of the very best unofficial apps and games and emulators that you can’t get on the iOS app store.

Downloading iOSEmus is a simple process; all you need is your device on either Wi-Fi or cellular – must be a strong connection.

How to Use iOSEmus:

iOSEmus is as easy to use as any app:

iOSEmus is an unofficial app installer, offering a good choice of Cydia tweaks, 3rd-party games, and apps that you just can’t download from the iOS app store.

Apple is somewhat strict on what they allow you to download on your device, which is why so many people opted to jailbreak. With Cydia in serious decline now, apps like iOSEmus are being released to provide us with some of what we used to download from the jailbreak store.

There are several upsides to using the iOSEmus app:

And, as always, there are a couple of downsides too:

How to Delete iOSEmus:

There are two ways to delete iOSEmus from your device should you decide you no longer want it:

As with any app, there are some questions that we get asked frequently about iOSEmus: 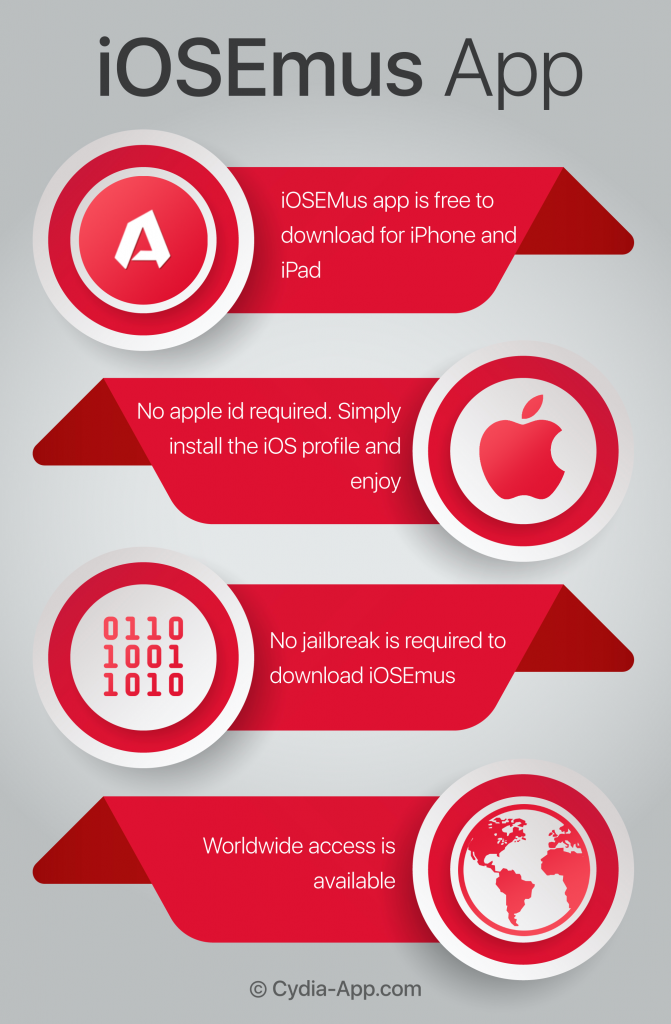 Yes, to both. There is no malware, viruses, or anything else in the profile, and our tests have shown it to be safe too.

Yes, but it won’t offer everything that was in Cydia – some of the apps and tweaks in Cydia required the jailbreak to work and cannot work without it.

It is compatible with all models of iPhone and iPad.

This is a common error and is fixed simply by deleting the iOSEmus profile and installing it again.

This is a simple one to fix. The error appears because it is unofficial, and the developer is unknown to Apple. All you need to do is note down the developer name from the error message and then cancel the message:

The error message will now be gone.

It is likely that you already have the app on your device, a different version. Find it on your device and delete it before trying to install the later version.

Because it is one of the top-rated iOS app installers, offering free access to 3rd-party apps and games that you can’t get from official sources.

No. iOSEmus has been designed to work without a jailbreak so anyone can install it on their iOS device.

Both Panda Helper app and iOSEmus are quite similar in what they offer, and the developers of the apps ( Twitter ) in both installers have partnered to ensure that users can install their emulators and apps no matter which installer they use.

Not at the moment. You will find links on the internet that claim to be the Android APK file for iOSEmus, but they are fake. We tested a large number of them, and they do not work. The developers have, at the moment, not developed the required APK file but, as soon as they have, we’ll let you know.

Tap on Apps and browse through what is on the screen.

No. It isn’t possible for all the tweaks and apps from Cydia to be made available without a jailbreak, but there is still a large number in the app.